7th International contest of caricature and graphic humor
NOTICARTUN COLOMBIA - 2021
"Tribute to Elena Ospina"
Cartoon Theme: Health Heroes (All medical staff)
We  present to all of you the call for the seventh edition of the NOTICARTÚN COLOMBIA contest  , which pays tribute to the Colombian cartoon in the person of the teacher Elena Maria Ospina, better known as "ELENA"
Support the Muestra de Comic sin fronteras Pereira (Comic without borders)  in its 21st edition.
Elena Ospina

Colombian illustrator and cartoonist who started her job at the newspaper  El Espectador . In the 90s he worked for several book publishers and was part of collectives of illustrators and cartoonists such as El cartel del humor. Later, he worked on the creation and illustration of editorial and advertising projects for America and Europe, and part of his work is published illustrating newspaper, book and magazine articles.

In 1997 he collaborated with Unicef ​​and the Presidency of the Republic of Colombia for the rights of children in several campaigns in favor of children. In 2007 she settled in Madrid, and participated in various exhibitions and campaigns on equal rights, gender equality, freedom of expression and ecology. In 2008 she was appointed honorary ambassador of the city of Granada, Spain. In 2009, she was invited to join Cartooning for Peace in France, an organization created by Nobel Peace Prize winner Kofi Annan and cartoonist Plantu. He is also part of the Cartoon Movement, FECO Spain and CartonClub collectives, among others. In 2011 he settled in Texas, United States, and joined the Society of Illustrators SCBWI.

She has been invited to the Ciudad de las Ideas México meeting, from 2011 to 2016, where she has participated with her drawings. He has also been a judge in prestigious international competitions such as the World Press Cartoon in Portugal, Aydin Dogan in Turkey, Salón de humor Piracicaba in Brazil and many others. He has obtained more than 60 awards in graphic humor and illustration competitions in Italy, France, Germany, China, Mexico, the United States, Israel, Belgium, etc. In 2013 he won the silver Cannes award at the “Imagen Palabra” Illustration Salon in Bogotá, a recognition of his work. In 2019 he received the Notary Award for humor, awarded by the University of Alicante, Spain.

Taken from:  https://www.tebeosfera.com/autores/ospina_elena_maria.html
Announcement:
1)  Open to all professional cartoonists in the world, preferably of legal age (18 years).
Deadline:   September 30 of this year ( 11:59 pm, COLOMBIA time ).
2) There will be 2 categories, Physiognomic Cartoon and  Graphic humour. (Works that are not related to this year's themes will not be accepted)

A .:  Physiognomic caricatures of  Elena Ospina  (no portraits). 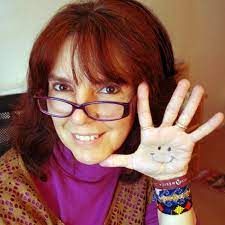 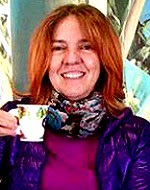 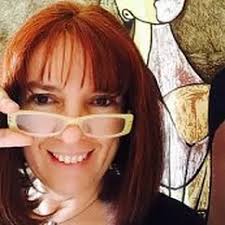 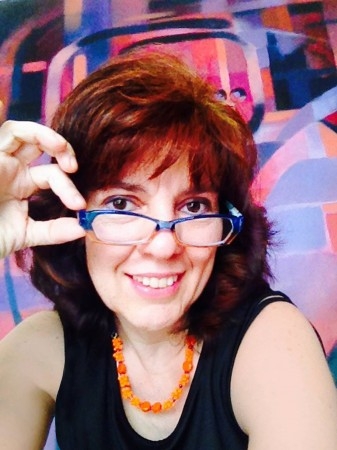 .
B. Graphic humor:  “ Health Heroes ”
Graphic and humorous tribute to the medical work of all the personnel who have attended the pandemic health emergency that we still suffer today.
3) AWARD:
- Caricature
1, 2, 3 Position  +  5 Honorable Mentions:  Virtual Diploma.
Graphic humour
1, 2, 3 Position  +  5 Honorable Mentions:  Virtual Diploma.
2 SPECIAL AWARDS FOR COLOMBIAN:
"Recognition Caricature and Graphic Humor Noticartún Colombia"
In addition, a virtual catalog will be designed to host on the official site of the contest.
4) Each participant can present at the event a maximum of 1 work per topic but it can only be awarded in one category and You can participate with cartoons in black and white or in color (Analogue or digital).
5) About the  JURY : 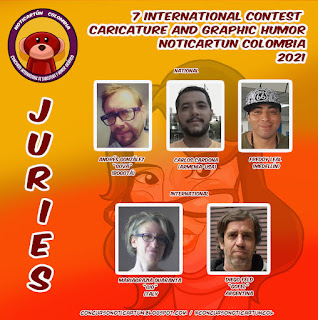 Made up of renowned professional cartoonists and cartoonists from Colombia, Argentina and Italy.
They may participate with works but only in collaboration and not for awards. (Their names will be coming soon) and Works of relatives or people with whom they currently have work commitments may not be taken into account for awards, if applicable.
6) The drawings sent will have a maximum dimension of 30 x 40 cm. JPG, 300 dpi and when sending the file, it must be named as follows: Capital letter, first letter of your name, space, capital letter, first letter of your last name, space and between parentheses, the name of the country for which has decided to participate.
Example: Camilo Triana (Colombia)
7) You can participate with cartoons that have already been published or awarded previously (As long as the authors own the rights to the works. More information Point 10). The selected works will be online so that if in any case someone has a complaint about the originality of the work, the jury and the competition organization will review the case and select a new finalist work.
8) All drawings submitted must be made from original ideas drawn or painted, whether presented in an analog (scanned) or digital way.  Memes, photographs, scanned photocopies, photomontages, collage, 3D render, sculptures, etc. will NOT be accepted.
9) Participants must send a brief curriculum vitae in word, contact information (Name, surname, email, website or blog and participant's country of origin) and a photograph or caricature.
10) Each author is the owner of their rights over their work and only authorizes the  International Cartoon and Graphic Humor Contest - NOTICARTUN COLOMBIA   to use it in this online tribute and its promotional pieces or in possible exhibitions of a cultural nature, without any economic remuneration for the parts. Any problem with copyright will be assumed by the participant.
11)  The  International Cartoon and Graphic Humor Contest - NOTICARTUN COLOMBIA , reserves the right to exhibit those works that it understands may violate individual or collective rights.
12) Participation in the contest implies full and unreserved acceptance of these conditions and we appreciate that, appealing to your professionalism, if you have any questions or concerns with the regulations, we thank you for dealing with the organization in an email and not in social media.
13) Works should only be sent to:
International cartoon and graphic humor contest - NOTICARTUN COLOMBIA
Topic: 7 NOTICARTUN COLOMBIA CONTEST - 2021
concursonoticartuncol@gmail.com
Kind regards,
Principal:
Camilo A. Triana C. "TRIANA"
Vice-principal:
Juan C. Lopera A. "JÚCALO"
(Context) History of the Noticartún Colombia Contest: https://concursonoticartun.blogspot.com/p/trayectoria-2014.html
Publicadas por Noticias de Cartoon Colombia a la/s agosto 05, 2021 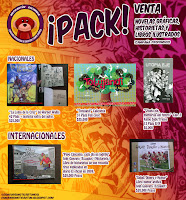 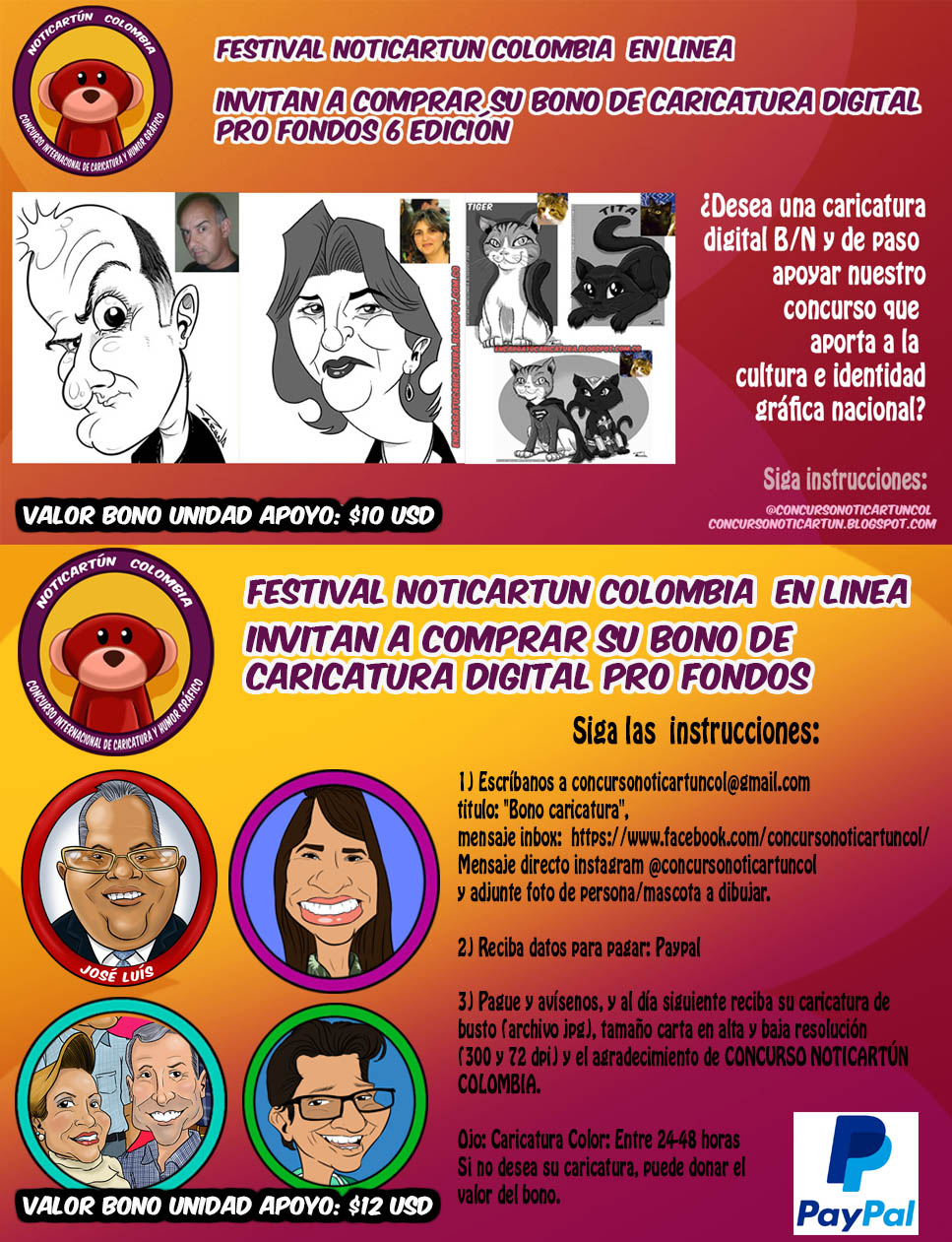 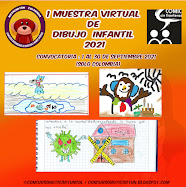